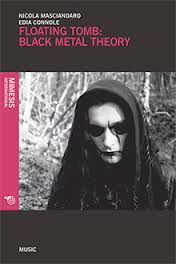 HIGH NOON SHOWDOWN ON BLACK METAL THEORY
TOPICS IN THE AESTHETICS OF MUSIC AND SOUND
SEMINAR SERIES
Thursday, October 1, 2015
3:15-5 p.m. in U67
Institute for the Study of Culture (IKV) University of Southern Denmark (SDU) Campusvej 55, Odense
Panel discussion (Via Skype):
High Noon Showdown on Black Metal Theory
With …
Karl Spracklen is Professor of Leisure Studies at Leeds Beckett University, UK. He is the Editor of Metal Music Studies and the Secretary of the International Society for Metal Music Studies. He has extensive research interests relating to leisure spaces and leisure identities, and has contributed to debates regarding leisure theory. He has over seventy publications, including three research monographs, the most recent of which is Whiteness and Leisure (2013), published by Palgrave Macmillan.
Niall Scott is Senior Lecturer in Ethics at the University of Central Lancashire. He is editor of Helvete: A Journal of Black Metal Theory and Co-Editor of Metal Music Studies. He is one of the founders and Chair of the Society for Metal Music Studies, and has published over 40 pieces in the fields of metal studies, black metal theory, political philosophy, cultural theory, ethics and bioethics.
Edia Connole is co-author with Nicola Masciandaro of Floating Tomb: Black Metal Theory (Mimesis, 2015), and co-editor with Gary J. Shipley of Serial Killing: A Philosophical Anthology (Schism, 2015). With Scott Wilson, Edia Connole is also the co-founder of MOUTH, an actionist art project in culinary divinomics. mmmouth.wordpress.com

Abstract: In this seminar defenders and critics will debate the epistemic value of black metal theory (BMT). An amorphous “metallectual” movement initiated in 2009 with the symposium Hideous Gnosis, BMT has developed in the form of a distributed and vexed forum for trans-disciplinary intellectual work committed to thinking “with” rather than “about” black metal. For defenders of the discipline, its value lies in its ability to destroy creatively the boundary between black metal and theory—constituting itself in the space of their shared negativity, as stated on its inaugural website: “Not black metal. Not Theory. Not not black metal. Not not theory. Black metal theory. Theoretical blackening of metal. Metallic blackening of theory. Mutual blackening. Nigredo in the intoxological crucible of symposia.” For critics of the discipline, this trans-disciplinary approach is devoid of purpose and meaning, and makes the work of critically exploring black metal more difficult.

All are welcome – also via Skype

Posted by glennrikowski at 12:25 PM No comments:

Will We Crash Again? Why Capitalism Needs Debt Write-offs to Survive 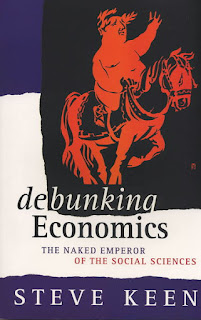 WILL WE CRASH AGAIN? WHY CAPITALISM NEEDS DEBT WRITE-OFFS TO SURVIVE
Conway Hall Ethical Society & London Futurists presents:
London Thinks – Will We Crash Again? Why Capitalism Needs Debt Write-offs to Survive
With STEVE KEEN
Tuesday 1st September @ 7:30 pm - 9:00 pm | £5 - £10
CONWAY HALL
25 Red Lion Square, London, WC1R 4RL United Kingdom
Website: http://conwayhall.org.uk/
Booking: https://www.eventbrite.co.uk/e/will-we-crash-again-why-capitalism-needs-debt-write-offs-to-survive-tickets-17879762852
Mainstream economists failed to anticipate the great financial crash of 2007-8. In this talk, Professor Steve Keen will share his view on the bigger picture – including recent financial developments around the world. He will review options for the future of economics, highlight the little-understood importance of debt, and argue that significant debt write-downs are needed in order to limit future financial crashes.
Steve Keen is a Professor of Economics & Head of the School of Economics, History & Politics at Kingston University. He was one of the handful of economists to realise that a serious economic crisis was imminent, and to publicly warn of it, from as early as December 2005.
A staunch critic of mainstream economics, his book Debunking Economics is now in its 2nd edition and has been translated into Chinese, French and Spanish.
The event will be moderated by David Wood, Chair of London Futurists. The talk will be followed by audience Q&A.
A cash bar will be available at the event. Afterwards, there will be the chance to continue the discussion at a nearby pub.
Organised in partnership with the London Futurists
London Futurists hold regular speaker events to explore radical scenarios for the next 3-40 years.
For more details, see http://londonfuturists.com/.

Posted by glennrikowski at 7:31 AM No comments: 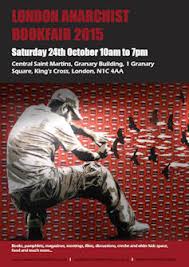 We have finally found a venue suitable for this year’s Bookfair. Central St. Martin’s is a huge building behind Kings Cross train station. It is a fantastic space for us all to display why anarchism is just such a bloody good idea. In these days of hyper capitalism an alternative is needed. That alternative can only be anarchism. Come and find out why.
If you want to book a stall or meeting or want an advert in the bookfair programme go to the bookings page.

Like all really good ideas, anarchy is pretty simple when you get down to it - human beings are at their very best when they are living free of authority, deciding things among themselves, rather than being ordered about. That's what the word means: without government. Read on...

Anarchism and the bookfair

Bookfairs provide a space where like-minded people can come together to re-affirm old friendships, make new ones, discuss all things anarchist and anticapitalist and start planning the future revolution. They're also one of the public faces of anarchism. Anyone unfamiliar with the ideas or wanting to know more about the politics can come along, look through books, sit in or get involved in meetings, workshops and discussions or just chat to the groups and organisations having stalls there.

It is also a space where we counter the rubbish talked about anarchism by sections of the media and our opponents. Bookfairs are one small element of making anarchism a threat to the present political system.

We need people to help us publicise the event to every nook and cranny in London. If you are new to anarchism, check out the pages websitesand bookfairs

There are links to anarchist and campaigning groups around the country and anarchist bookfairs throughout the world.


Volumizer: http://glennrikowski.blogspot.com
Posted by glennrikowski at 6:49 AM No comments: 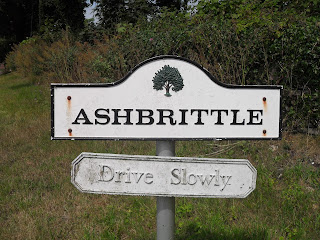 ASHBRITTLE
Ruth Rikowski traces her Vickery family roots in her latest blog, ‘Ashbrittle’.
We visited Ashbrittle, Somerset, on Friday 17th July 2015. This is where Ruth’s great grandfather – Charles Palmer Vickery – was born, in 1853. Ruth gives a detailed account of our visit and the aftermath
Ruth’s blog includes pictures of me (Glenn) and herself and of course many pictures of Ashbrittle itself – with a blog commentary.
See Ruth's Ashbrittle blog at: http://ruthrikowskiim.blogspot.co.uk/2015/08/ashbrittle.html

Posted by glennrikowski at 9:55 AM No comments: