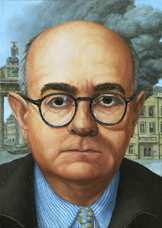 CALL FOR PAPERS
6TH INTERNATIONAL CRITICAL THEORY
CONFERENCE OF
Stream on Marx and the : New Perspectives and their Contemporary Relevance.

Recent years have seen a flourishing of new perspectives on the contemporary relevance of Karl Marx’s thought. Very little of this thought has been applied to the relationship between Marx and the work of the .  Instead, with the notable exception of scholars such as Werner Bonefeld and Moishe Postone, much of the work on Marx and the in the Anglophone world is still approached through paradigms such as the Marxist Humanist discourse of alienation or of scholarly interpretations established by Jurgen Habermas, Martin Jay and Gillian Rose. This stream aims to bring together the best contemporary scholarship offering new perspectives on the relationship between Marx and the and to consider the contemporary relevance of this relationship.

·      New assessments of the relationship between Marx and major figures from the Frankfurt School including Horkheimer, Adorno, Benjamin, Marcuse, Habermas and Honneth.

·      Comparative accounts of different figures from the ’s interpretation of Marx.

·      New assessments of the reception and the influence of the ’s relation to Marx in national and international contexts.

·      Criticisms different Marxisms or critical theories might have of thinkers from the .

·      Criticisms the thinkers from the might have of Marx and different Marxisms.

·      Productive and elective affinities between Marx, figures from the Frankfurt School and other Marxist schools such as Auotonomism, Political Marxism, Open Marxism, communisation and value-form theory.

·      Contextualizing the reception of Marx and the in the work of Martin Jay, Gillian Rose, Jurgen Habermas etc.

If you are interested in presenting a paper or organizing a panel (of up to 3 speakers), please submit a 1-2 page abstract by February 28, 2013 (including name and institutional affiliation). Abstracts should be submitted by email to the stream coordinator Chris O’Kane at: theresonlyonechrisokane@gmail.com
Decisions regarding the program will be made by March 2013.

A Call for Chapters for an upcoming book ... feel free to be creative with the formats!

The book is:
Only Connect ... discovery pathways, library explorations, and the information adventure

Research is about juxtaposing entities that were previously unrelated

The book will consist of a series of narratives connected by the over arching theme of information discovery journeys. The authors of the individual chapters are free to decide the most appropriate structure to tell these stories about information discovery, whether that is traditional textual formats, more free form text (e.g. transcripts of social media interactions; poetry; illustrative fictional prose), through images, video, or whatever media seems appropriate to the author.

The text will be electronic by default, available freely under CC license (see note http://innovativelibraries.org.uk/index.php/onlyconnect/#Note). Print on demand versions will be made available if deemed appropriate when editing the finished text.

Contributors will be selected by the editors after submitting a proposal to the call for papers. Final submissions will be subject to the lightest possible editing, in conjunction with the author, to insure the integrity of the original submission is maintained.

Please send a title and short description (around 200 words) of the chapter you propose to the editors at: infojourneys@innovativelibraries.org.uk
>

Include the topics you would cover, the structure your chapter would take and any special format or structure your contribution would require. We'll get back to you as soon as possible.


Bypassing established publisher routes means that our 'unbook' can be:
*         Creative Commons licensed, giving contributors recognition and making the material immediately free and sharable online
*         Multimedia - contributors pick their preferred format: prose, video, images, Storify'd tweets, graphs, data ... (print-on-demand an option for textual parts, linking to additional non-textual material via an app such as Aurasma. Details of this to be confirmed at a later date.)
*         Free of the writing conventions imposed by traditional publishers - contributors can retain their own voice, choose the length of their contribution, use whatever format they prefer

Note on licensing: We will ask authors / contributors to sign a simple agreement to allow us rights to publish their contribution and to permit others to use the contents of the book under CC licence http://creativecommons.org/licenses/by-nc/3.0/. Contributors will retain copyright over their work. 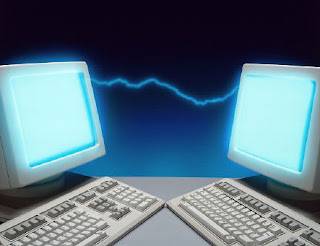 We would like to take this opportunity to extend an invitation to you and your colleagues to submit a paper for possible inclusion in:
The International Conference in Information Science and Social Media – ISSOME 2013
Date:  September 11-13, 2013
Place: Borås, Sweden

In recent years, research on social media has had a dramatic development in most research areas within the humanities and the social sciences. It is also notable that an increasing number of scholars are embracing the everyday concept social media as a label for their research, thereby sidelining interesting theoretical competitors such as new media, participatory media, participatory culture, web 2.0 and social technology. The emerging conceptual ecology surrounding Internet-based user generated platforms are currently in need of critical scrutiny.
It is important to discuss the role of information science in this developing research area. What are the specific perspectives and added values that information scientists bring to the study of social media?
What territories and boundaries can we see have emerged? Furthermore, what fruitful synergies between information science and other disciplines could be developed?
We invite researchers worldwide to submit original research within the topics of the conference. Submissions should be extended abstracts of no longer than 1500 words. All submissions will be double-blind peer-reviewed.

For more information visit the conference's official website at: http://www.hb.se/wps/portal/sms/issome2013 and please help us to distribute this information as widely as possible.

We look forward to receiving your submissions and meeting you in Borås.

Social Change and Education in Greece: A Study in Class Struggle Dynamics 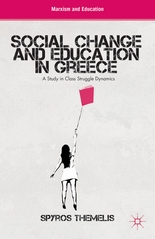 SOCIAL CHANGE AND EDUCATION IN : A STUDY IN CLASS STRUGGLE DYNAMICS – A NEW BOOK BY SPYROS THEMELIS

A New Book by Spyros Themelis,
Social Change and Education in : A Study in Class Struggle Dynamics (2013, Palgrave )
This book takes a challenging and refreshingly novel approach to the way education and social mobility are researched and theorised. The key message it delivers goes against the dominant post-war orthodoxy, which has postulated that education is both a mechanism for upward social mobility and an engine for economic growth in liberal capitalist countries. The conclusion the author reaches flies in the face of mainstream political consensus that perceives social mobility as panacea for the provision of occupational opportunities and an instrument for the levelling of the playing field. Much of what lays beneath social mobility, Spyros Themelis argues (apart from a great deal of sophisticated number-crunching) is a celebration and acceptance of an unequal system of allocation of opportunities.
This is one among very few studies that explore social mobility and attendant processes with the use of both qualitative and quantitative methods. The author views social mobility not merely as the outcome of the movements of individuals from one income or occupational group into another, detached from their societal, community and family context, as in conventional mobility studies. Instead, he examines social mobility as a complex process, where socio-economic (e.g. migration), cultural (e.g. marital practices and community values) and political (e.g. political patronage) forces, experiences, arrangements and strategies interact and interconnect in impeding or enhancing individuals' and families' social mobility movements.
The book makes some contribution to the ongoing debate about the economic crisis that has hit since 2009. It suggests that the failure of education to promote equality of opportunities is symptomatic of the failure of the wider system to prioritise fair and equitable arrangements. If 's current situation is to teach us a lesson, this is to urgently rethink about the whole system, not only in but in the rest of the Western world too. The myth of education-based meritocracy and unfettered social mobility has anaesthetised Western societies to the multitude of social inequalities with which they are permeated. These might be hard times, but all the more appropriate to urge us to think about positive social change.

Dr Spyros Themelis is a Senior Lecturer in Education, Department of Education, .

The book can be ordered from this link: http://www.palgrave.com/products/title.aspx?pid=537469

It is published in the Palgrave Macmillan Marxism and Education Series: http://www.palgrave.com/products/SearchResults.aspx?s=ME&fid=3658 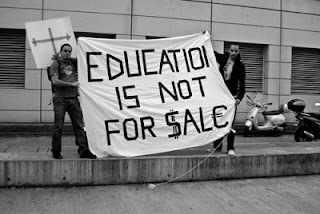 A debate on the privatisation of education

Dr. Patricia Walker ( of , and Labour councillor for )

UPDATE 23rd FEBRUARY 2013:
Report on the Debate in the Times Higher Education: http://www.timeshighereducation.co.uk/story.asp?sectioncode=26&storycode=422702&c=1

Posted by glennrikowski at 11:21 AM No comments: